“What’s that in the mirror or the corner of your eye? What’s that footstep following, but never passing by? Perhaps they’re all just waiting, perhaps when we’re all dead… out they’ll come a-slithering from underneath the bed.” -The Doctor, Doctor Who Season 8, Episode 4, “Listen”

(This post will cover the Doctor Who episodes “Blink”, “The Impossible Astronaut/Day of the Moon”, and “Listen.”)

Steven Moffat, despite what his critics may say about him, in many regards is an excellent storyteller. You may call him sexist, or critique the holes in his stories, but he is arbitrarily a horror expert.

Doctor Who often has a monster-of-the-week feel; Certain episodes are often compared to Alien as they feature our protagonists trapped in a spaceship with some kind of a monster, getting picked off one by one in the fashion of a horror film (“The God Complex”, “Under the Lake” to name a few). At the very least, there’s almost always a monster or dangerous creature; in “The Eleventh Hour” it was the eerie-looking snake-like Prisoner Zero, and in “The Empty Child” it was the scariest child on the planet.

Moffat’s best episodes in Doctor Who’s horror medium all hinge on the notion that there is something horrible hiding in every corner of life, and every person is completely unaware. It’s as though there isn’t just a monster under the bed, but a monster everywhere else too. Moffat uses the monsters to change the way we view the world; this makes it all the eerier when we have dreams like that in “Listen,” or see a statue of an angel.

Moffat’s biggest contributions to the Doctor Who mythos are the Silence and the Weeping Angels. The former, if you’ve forgotten (ba-dum-tiss) are suit-wearing, round-headed aliens, closer in appearance to traditional extraterrestrials, the twist there being that as soon as you look away from them, you forget having seen them. The fan-favorite Weeping Angels are statues that remain still until you stop looking at them, at which point they grab you and send you back in time. Don’t blink! (Scary stuff. One might suppose that they are combated in the same manner: Looking at them until your eyes fall out.)

Half the horror of the Weeping Angels is that they have a place in the real-world; they can be disguised as a regular angel statue. Here, Moffat takes something everyday and makes it scary.

Incidentally, the Silents have inspired a bit of a similar eeriness in the real world. The tumblr post below really hits the nail on the head about how eerie these aliens are. 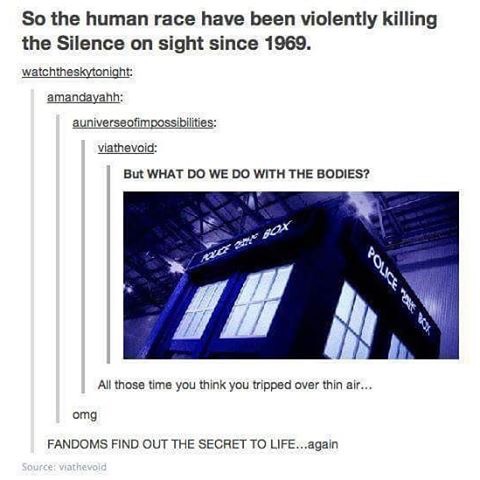 Additionally, the Doctor Who Fandom commemorates April 23rd (the day “The Impossible Astronaut” aired in 2011) as “Stop the Silence Day“, in which they draw tally marks on their arms, just like the characters in the show. This indicates a link between the fictional characters and the real world. This link is the power of horror, because that’s what horror does to us, and why people are so hesitant to watch horror: it activates our fear, which we then carry around with us.

Less-used and less-lauded than either the Silence or the Angels, there’s the Vashta Nerada from “Silence in the Library.” Essentially, these are invisible creatures that eat flesh like piranhas and live in the shadows. The Tenth Doctor tells his companion all about this, giving an epic monologue about how humans have good reason to be afraid of the dark. The audience, some of whom might already have misgivings about the turning out the lights, would have their fears doubled.

Then there’s “Listen.” (I was going to call this the best episode of the Capaldi-Era, but then 50-minute masterpiece “Heaven Sent” rolled around.) 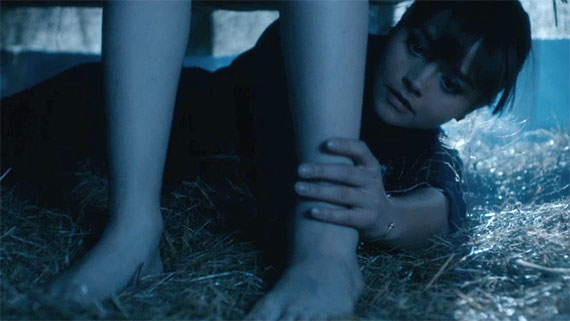 “Listen” is the magnum opus for this subgenre. In it, the doctor contemplates why people talk to themselves, suggesting that we are speaking to a creature who has developed perfect hiding.

Upon first seeing it, it marveled me with its understanding of horror. By
genre definition, traditional horror is a build-up to a reveal of the monster or killer or what-have-you, until we finally see the monster. Horror depends on this reveal, as a means of relieving fears. Once we see the monster, we recognize it, and that makes it just a little less scary. In “Listen,” Moffat subverts the expectation of the reveal, and we find that never actually seeing the monster is all the more impactful. (Also, note that we never see the Vashta Nerada, and we only see the Angels move once.) “Listen” relies on viewer imagination, leaving us desperate to see what the creature looks like. We get just enough of a taste for what this monster is: the shot (see below) of the creature underneath the blanket, and the damage 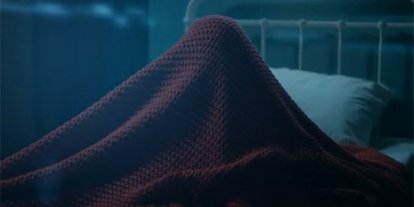 of the Doctor’s off-screen encounter with it, coupled with the Doctor’s nursery rhyme shows us just enough of the monster to scare us, but not enough to relieve our fears.

The monster of “Listen” comes out of a common phobia; the fear that we’re never truly alone, and that there will always be a monster under the bed.

The most horrifying thing about the Silence, the Angels, the Vashta Nerada, and “Listen” is that, because of their perfect camouflage, they are (in theory) perfectly congruent with our world. The true terror of Moffat’s Monsters is that they leave no trace. Whovians (for the uninitiated, Whovians are Doctor Who Fans) carry the fears from the show and into real life: that’s why they might look with terror towards a statue of an angel, or be wary of the darkness. Now, I recognize that this is fiction, and that the horrors of the Doctor Who-Universe remain in the Doctor Who-Universe, but the horrors of that world are made to mirror our own. Moffat’s horrors are like Greek myths, made to explain eerie phenomena and strange sensations. It takes a true master of horror to make everyday life spooky.

University Study on Sexism in BBC’s Doctor Who (As this is a post on a rather debated screenwriter, I thought it best to include an explanation of the controversy Moffat has encountered.