As I have noted before, the market for these kind of movies is becoming rather saturated. There are so many movies that the viewers need to care about in order to follow it all. Age of Ultron, for all its good qualities, certainly felt as though it (and in effect, the genre) was getting too large for its own good. These films all seem to be building to something, but it feels like we’ll never get there. With this in mind, I’m here to propose an idea (I say this half as a joke, and half seriously): Marvel, DC; Let’s skip all the bullshit. You know what we want. A Marvel vs DC crossover movie. 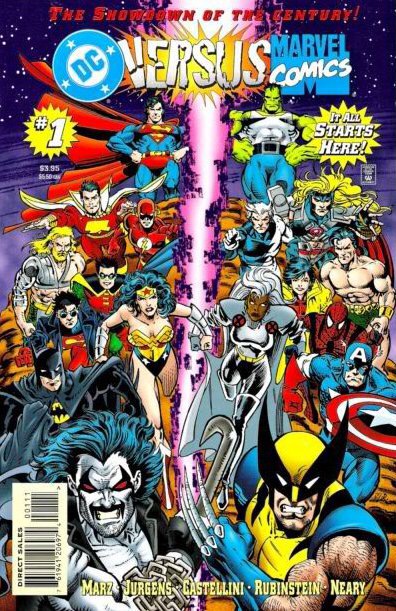 From the early 2000’s to now, superhero movies have been on such a gradual but steady up-slope that it’s odd to think that we might be at the high point of this trend. Steven Spielberg has said that superhero movies are bound to go “the way of the western” and gradually die out. And I’m not sure he’s wrong. (Then again, what does he know? He directed Kingdom of the Crystal Skull!) This genre is starting to face a great deal of problems: too many characters, characters who would fit well in this story are owned by other studios, plot’s too convoluted, does too much to set up subsequent films, etc. So what I propose puts a definitive end to the problems of the genre: make one, final, excessive, balls-to-the-wall movie and be done with it.

Batman v. Superman, at the Warner Bros./DC meeting, must have started as a movie featuring the two greatest heroes ever to grace comic books. Then, it was decided they would bring in Wonder Woman, because she too is a hero of note that deserves a place in such a historic film. And there has to be a villain for them to fight, so why not (hipster Eisenberg) Lex Luthor? Hey, there’s room for some more heroes, how about Aquaman! (Aquaman? Are you sure about that?) And Cyborg! And the Flash (never mind that Flash has a competing tv show)! But things are a little light on the villain side, so let’s bring in General Zod’s corpse and… Is that Doomsday?!

All these superhero-team-up movies are starting to follow a pattern; a group of gifted individuals fight amongst themselves until finally they all unite to fight a villain. (If Captain America: Civil War manages to subvert that, I will be thrilled. And that does seem to be what it’s going for. Dawn of Justice seems to imply that the characters will have a stronger bond after they fight, but Civil War seems to imply that the relationship will be fractured.) Now that’s a basic formula, and it seems that by and large, the studios have been afraid to go against it; they’ve only been willing to do it with different characters. And who can blame them? Why be creative and divert from that? The Superhero trend is showing us that it’s more important to do things bigger rather than better. So why not go as big as we possibly can? We could have a Marvel vs. DC in which all our heroes face off against one another until finally they have to go fight the love child of Thanos/Darkseid/Galactus.

And there are so many interesting things that can transpire.

This panoramic shows literally fucking everyone. (Except Spiderman, I suppose.) 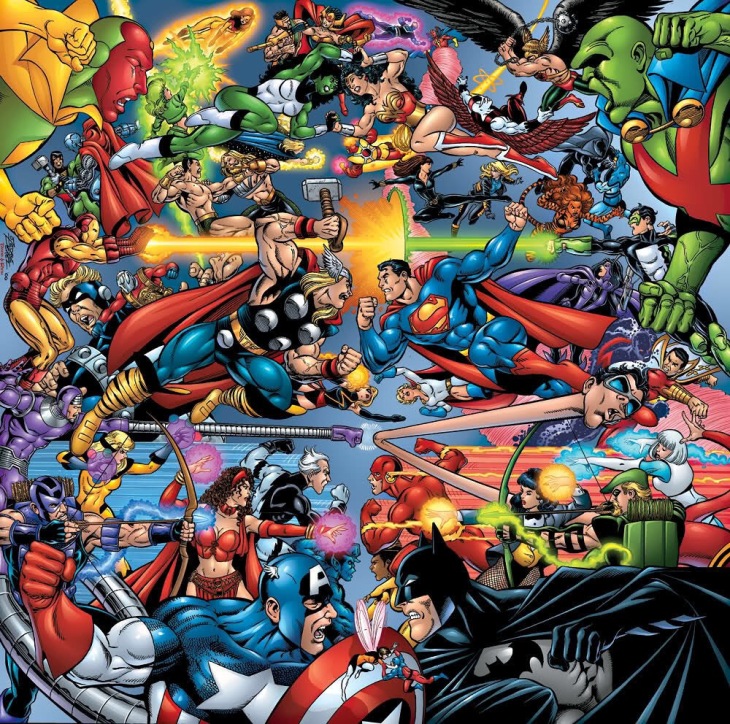 Here’s a humorous moment between The Joker and Red Skull! 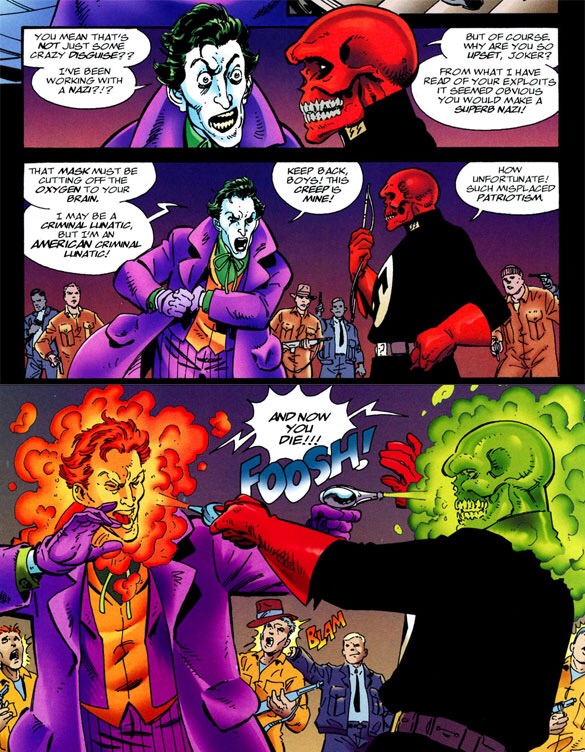 Here’s the most amazing thing a nerd could ever see.

Superman, holding Mjolnir (Thor’s hammer) and Captain America’s shield. At this point, there is no plausible need to explain the need for a Marvel/DC crossover. Fox, Sony, give back the X-men and Spiderman (permanently). Zach Snyder, stop talking smack to the folks at Marvel. Sam Jackson and Anthony Mackie, stop talking smack to the folks at DC. Put all beef aside and just give us this absolutely ridiculous but absolutely necessary  movie. Make it happen!

9 thoughts on “A Modest Proposal for Superhero Films: Let’s Cut the BS”