As much as I read them, I don’t usually partake in the Discover Challenges presented weekly by WordPress’ Daily Post. But since I frequently write about Superheroes, and that’s the theme this week, it’s high time I partook.

A lot can be learned from Superheroes. Comics were designed initially for kids, to help stretch their imagination and to inspire greatness.

Most of Batman comics depict the Caped Crusader as a hyper-intelligent, disciplined, and unwavering in his principles. No quest for justice is quite as prominent as Batman’s. Through the terrible trauma he experiences early in his life, something great emerges.

My favorite X-Men volume, Astonishing X-Men volume Gifted, (which provided similar ideas seen in The Last Stand, involving a cure for mutations) taught me that one has to be careful in trying to remedy their imperfections, because it could fundamentally change who you are. It’s not about being perfect, it’s about being true to yourself.

Uncle Ben taught us that great power comes with great responsibility. Guardians of the Galaxy shows us that it’s never too late to do something good for the universe. The Avengers and the Justice League show us the power of teamwork.

Captain America taught me that you have to be firm in your convictions and tell the other guy, “No, you move.”

This unwavering commitment followed the character to Captain America: Civil War. After seeing it, a friend of mine complained that after a certain point, wouldn’t Cap just let Bucky go? In Winter Soldier and Civil War, Bucky brought nothing but trouble, and seemed surely guilty. But no, Steve knows his friend is innocent, and is with him all the way.

Not to mention all the characters like Wonder Woman, Black Panther, Kamala Khan, and others, who help empower women or racial minorities.

On a semirelated note, the last character I’d like to highlight is Superman. Now certainly, this poster is not in any Superman canon, but it is true to the character, and honestly inspiring. As they say, Superman stands for “truth, justice, and the American Way,” and this helps make it clear: he stands for all Americans. 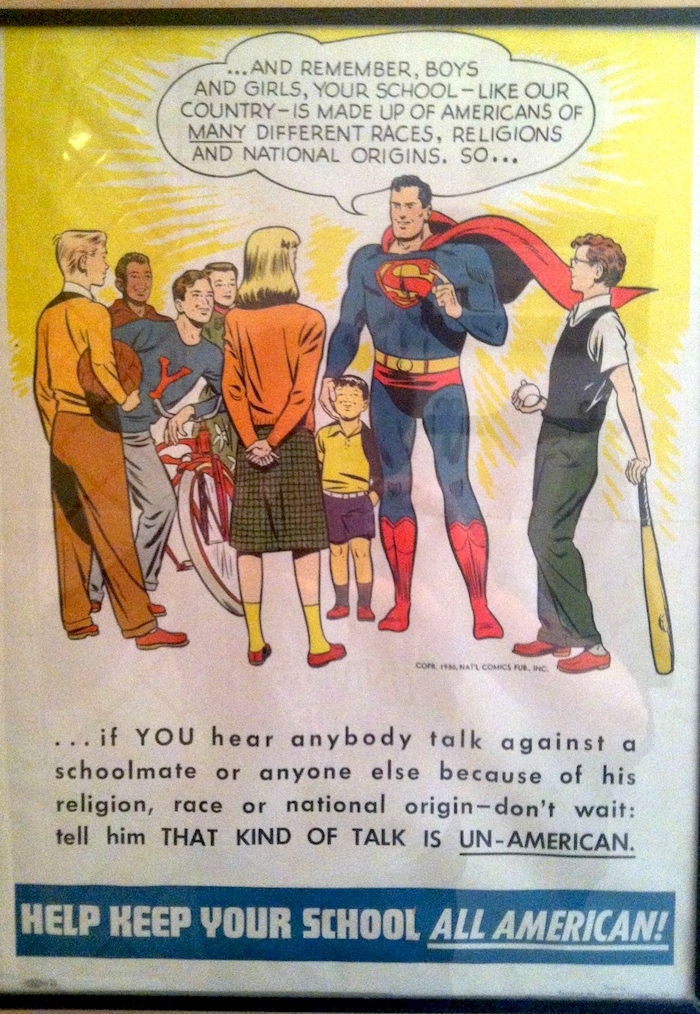 Written originally by Jewish-Americans Jerry Siegel and Joe Shuster, the character has had various messianic interpretations over the years. Notably, take a look at Man of Steel. Not a great film by any means, but builds an interesting Christ allegory throughout. Man of Steel‘s third trailer is one of my favorite trailers ever. Every once in a while, I go back and re-watch it, and it gets me a little excited for a movie that I know isn’t that good.

Why? Because it’s just so damn inspiring. Superman taking flight, with that huge orchestral music, and Jor-El’s speech? Beautiful. In fact, Jor-El hits right on the head what I’m trying to say. Superman, and all the heroes like him, give us an ideal to strive towards.

That’s what heroes are for us. A call to be better. Superhuman in not only their abilities, but their actions. So when people tell you that superhero comics are for kids, tell them all the things those heroes have taught you.