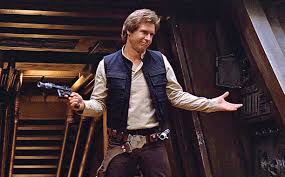 The Cantina is one of the iconic locations in the original Star Wars. In the center of Mos Eisley, the “wretched hive of scum and villainy” there’s a seedy tavern where Obi-Wan and Luke meet Han and Chewbacca, Han fights off and over-eager bounty hunter, and we see the first of many limbs being chopped off in the Star Wars franchise. If you know a thing or two about Star Wars, you’d recognize that second detail I mentioned as the “Han Shot First” scene. For the unfamiliar, when Greedo, a bounty hunter, threatens to shoot Han, Han subtly draws his blaster and shoots him first. This was infamously changed in the 2004 re-release of A New Hope. Here’s a side-by-side comparison of the two editions of Han’s encounter with Greedo:

The way George Lucas justified Greedo shooting first was this:

The issue is one of characterization. Lucas wants to characterize Han as a bold hero who unflinchingly waits to shoot Greedo until after Greedo has shot at him first. He essentially wants to characterize Han Solo as John Wayne. This makes perfect sense, because aside from sci-fi and samurai movies, the clearest influence on Star Wars is very clearly the tradition of cowboy movies, and this is demonstrated in the quote above. John Wayne westerns were clearly on George Lucas’ mind when he made the original film. The early scenes of the original Star Wars and the most beloved John Wayne classic, The Searchers; the cinematography of the moments when John Wayne’s character Ethan finds his friends dead and when Luke finds his aunt and uncle dead are similar, almost shot-for-shot. They can be side-by-side in this video. So John Wayne’s influence on Star Wars is abundantly apparent.

The important counterpoint I offer to the John Wayne argument is the same one that the Western genre offered to John Wayne in the mid-1960’s: Clint Eastwood.

John Wayne’s most famous movie is The Searchers – he plays a rancher who heroically searches for a kidnapped girl. Compare this to Clint Eastwood’s most famous movie, The Good, the Bad, and the Ugly, in which he plays a treasure hunter who isn’t afraid of double crossing and killing his way to a great sum of money hidden in the American West. Perhaps you see where I’m going with this.

In this interview with James Lipton, Clint explains the necessity of shooting first. Lipton explains that Clint’s the Man with No Name character from The Good, the Bad, and the Ugly muddied the waters as far as character morality goes; he wasn’t a black-or-white character. When Lipton notes that No Name didn’t wait for the other guys to shoot first, Clint retorts:

Yeah, well, it doesn’t make sense, why would you wait for somebody to [shoot]? In American Westerns, I could never understand that. I remember Don Siegel got in trouble when he was doing a movie called The Shootist some years later and he was working with John Wayne. The villain sneaks around the room and John Wayne comes up behind him and then [Siegel] says, “And then you shoot him.” After a long pause John Wayne says “You mean I shoot him in the back?” And he says “Yeah,” and Wayne says “I [John Wayne] don’t shoot anyone in the back.” And Don made a terrible error and said “Clint Eastwood would have shot him.” 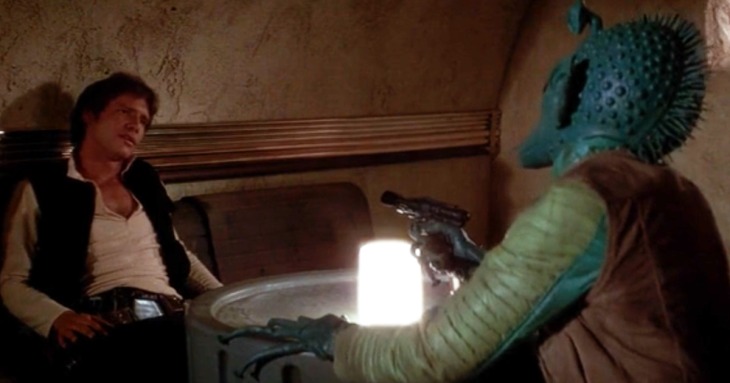 Clint Eastwood and John Wayne are easily the two most iconic cowboy actors of the great age of the Western. For the most part, they embody two different characters; the respectable lawman and the rogue bounty hunter (and sometimes outlaw). Since Star Wars clearly takes influence from Westerns, it makes sense for Han Solo to emulate one of these characters, doesn’t it? And sure, by the end of the trilogy, Han is a hero and gets the girl, but he starts off as a smuggler just trying to get enough money to pay off his bounty. Now, does that sound like John Wayne to you? Of course not. It makes sense to start this character off with a killing that is simultaneously self-defense and cold-blooded murder. The Han’s original trilogy character arc is the story of him starting off as Clint Eastwood and gradually becoming John Wayne. If you say he wouldn’t shoot first at the end of the trilogy, you’re probably right. But if you think he wouldn’t shoot first at the beginning of the trilogy, you’re probably wrong. When Han waits to shoot, his character arc means less. He’s no longer a bad guy learning to be good, he’s an all right guy learning to be good. I just think it’s a shame that George Lucas decided to change this, and I think it’s a shame that the Star Wars fandom thinks that Greedo shooting first is bad because it “makes Han seem less badass” or because any change to the original movie is an affront to some unthinkably perfect movie.

Obviously, this doesn’t make or break Star Wars, it’s still one of the greatest and most influential movies ever made. But in a movie that relies so heavily on its inspiration from cowboys and samurais and medieval knights, this feels like a misstep. I think this brings up an interesting question; how much influence should a creator have on a character after that character is debuted? And what do you think? Was Lucas right in making Han seem more heroic, like John Wayne, or did Han Shoot First?