May 2, 2018May 2, 2018 Author by Andrew RainaldiPosted in Marvel Cinematic Universe

This post WILL NOT discuss the events at the end of Avengers: Infinity War, but that likely wouldn’t be an issue, as the box office numbers seem to suggest that you’ve most likely seen it anyway. On Monday, we learned that it beat the record previously held by Star Wars: The Force Awakens for biggest opening weekend. On Tuesday, it surpassed the entire theatrical run of one of their closest genre competitors – DC’s Justice League. As I’m writing the beginning of this post, it’s made $726M worldwide, but by the time I finish this post, it will likely be much more.

So the opening weekend was huge. Now obviously, a lot of that is going to come from audience enthusiasm; the more passionate your fans are, the more likely it is that they’ll make a big event out of the premiere. That being said, one thing that people aren’t talking about is that spoiler-culture creates a sense of urgency that might have contributed to a bigger opening.

Star Wars: The Force Awakens began showing in theaters on a Thursday night – later that very night, I was scrolling through a thread that had no relation to Star Wars and read a comment that said “[CHARACTER A] IS KILLED BY [CHARACTER B] WHO ALSO TURNS OUT TO BE HIS SON.” Wow. I was not happy about that. (I slightly admired the gall and ingenuity of the person who set up a Wi-Fi hot spot at the movie theater called “[Character A]Dies”. That was cruel, but at least it was funny.)

But this is spoiler culture – I’m to blame because I didn’t see The Force Awakens during the very first showing. If I had, that random commenter wouldn’t have the ending ruined for me. And after a few years of the internet, we’re used to this sort of thing. We’ve just accepted that you have to see a movie its opening weekend or otherwise risk having someone tell you how it ends. 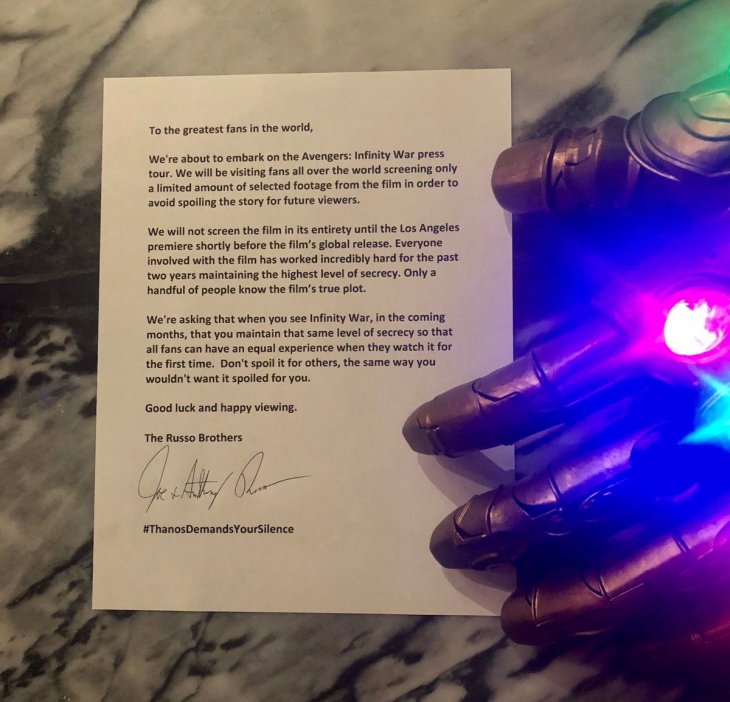 So, the week prior to the release of Avengers: Infinity War, directors Joe and Anthony Russo and the Avengers social media team started a hashtag that accompanied a video which suggested that the villain of the film, Thanos, demanded that nobody spoiled it – #ThanosDemandsYourSilence.

Clearly, something big was going to happen. Presumably, a beloved character was going to die, or something of similar magnitude would happen. People were going to tweet something out like “Citizen Kane dies in this one!” or “Darth Vader is Thanos’ father!” And that would be how you’d have that big surprise ruined for you. #ThanosDemandsYourSilence was the studio’s fun and playful way of asking people not to discuss the ending of the movie before everyone’s had a chance to see it – but it also works as a warning. “Go see this movie! Quick! Before someone spoils it for you!”

Now I’m writing the end to this post, one day later, and Infinity War has unsurprisingly passsed the $800M mark in less than a week. That’s an astronomical amount of money. It made more money in its opening weekend than any movie we’ll see in a long time, I expect – except, perhaps Avengers 4. Did that happen just because of the #ThanosDemandsYourSilence hashtag? Maybe not, but spoilers were a serious concern for many viewers, and the hashtag served as an urgent reminder that spoilers wait for no one.

3 thoughts on “Did a Hashtag Contribute to Infinity War’s Success?”