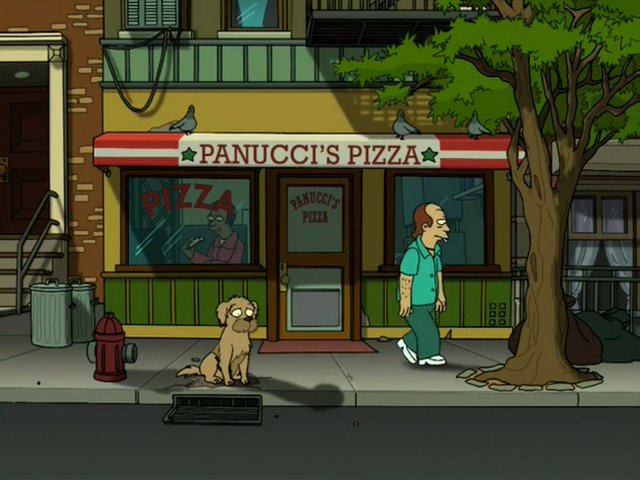 For the sake of full disclosure, I’ll say that “Jurassic Bark” is not my favorite episode of Futurama. That honor goes to either “The Devil’s Hands are Idle Playthings,” “Roswell that Ends Well,” or “The Problem with Popplers.” But that won’t stop me from declaring that “Jurassic Bark” as the best episode ofFuturama.

Treasures of the Stupid Ages

I remember watching “Jurassic Bark” when it first aired in November 2002. I was a teenager and my family never had pets (my father was allergic) so the infamous ending of the episode didn’t make a huge impact on me. It wasn’t until I was much older that my first and only dog came into my life, and I’ve since lost custody of her. To say that my perception of the episode changed after that would be a monumental understatement. But to be clear, I don’t think “Jurassic Bark” is the best episode ofFuturamajust because it’s “the sad one about the dog.” My assertion is based on the narrative themes of the episode and the two characters at the center of the story. 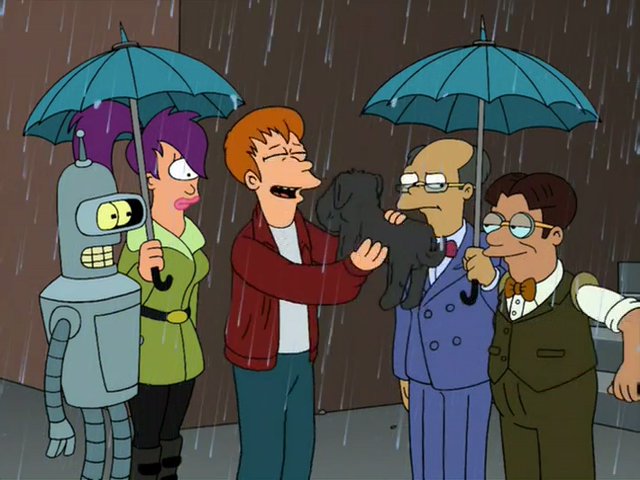 Fair warning, this article contains spoilers. The episodes takes place in two timelines. In the thirty first century, Fry discovers the partially fossilized remains of his dog Seymour while visiting the Natural History Museum. He is ecstatic to learn that Professor Farnsworth can not only clone Seymour but restore his consciousness exactly how it was in the twentieth century. But the attention Fry lavishes on Seymour makes Bender jealous. In flashbacks to the twentieth century, Fry adopts Seymour off the street and gives him a home at Panucci’s Pizza. On New Year’s Eve 1999, before Fry leaves on his fateful delivery to Applied Cryogenics, he tells his dog, “I won’t be gone long, Seymour. Just wait here until I come back.” And when Fry goes missing Seymour attempts to find him.

Bender is the main character of the episode, and up to this point in the series he’s done some pretty terrible things. He cheated on his girlfriend and primary mode of transportation (“Love and Rocket”), he flushed Nibbler down the toilet (“I Second that Emotion”) he joined the Robot Mafia and helped them rob his friends (“Bender Gets Made”) just to name a few. And he rarely suffers significant consequences for his actions.

In “Jurassic Bark” we see Bender at his worst. Not just because of what he does, but because he does it to Fry, his best friend in the whole universe. The episode begins with Bender dismissing Fry’s excitement for the twentieth century pizzeria exhibit at the museum. “Interesting,” Bender says in response, “No, wait, the other thing … tedious.” And he only gets more immature and selfish from there. At the end of the first act Fry reveals that Seymour will live again and Bender’s reaction isn’t reciprocal happiness, it’s envy. Bender sees Seymour as a threat. 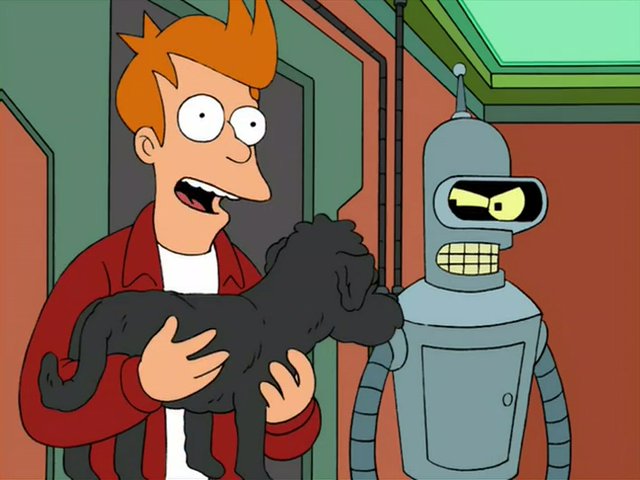 Seymour’s appearance hits on Bender’s biggest misunderstandings, insecurities, and flaws. Firstly, as a robot, Bender doesn’t understand the relationship a human can have with a dog. “Are you on the junk, Fry?” he asks, “why are you wasting time on a creature of inferior intelligence?” His attitude is somewhat understandable when you consider that Bender has only recently made human friends and become part of a human workplace. He doesn’t completely grasp their culture. Add onto that his oft-expressed feelings towards humans that don’t work at Planet Express (“Hey sexy mama, want to kill all humans?”) who he considers to be inferior to robots.

I’ll also make the argument that Bender’s insecurities come from a fear of being replaced. When Fry proclaims, “can you believe it, Bender? I’m going to have my best friend back!” a shadow of doubt is cast over Bender’s status as Fry’s best friend. If he’s not Fry’s best friend, then what is he? Just a drunken garbage can with sparks coming out of it? The thought of being sent to the scrap heap because of a dog, while irrational, is enough to throw Bender into a serious identity crisis.

But none of that excuses what Bender does. Because instead of communicating his feelings he becomes excessively selfish. He acts out and puts his own happiness above Fry’s; all the while choosing to ignore Fry’s profoundly emotional reunion with Seymour. It climaxes at the end of the second act when Fry, irritated with Bender’s attitude, brushes him off one last time. “So that’s how it is, huh?” Bender fumes, “I thought you were my friend. But if you love your dog so much, maybe you’d rather play fetch!” Bender grabs Seymour’s fossil and throws it into the lava pit at the center of the Planet Express sub-basement.

Fry attacks Bender in a fit of grief. But when Professor Farnsworth tells Fry there’s a chance Seymour’s fossil could withstand the heat from the lava, Fry declares, “then I’m going in after him!” He rips off his clothes and sprints to the lava pit, “he’d come after me!” And he was right.

You Call No Man Mister 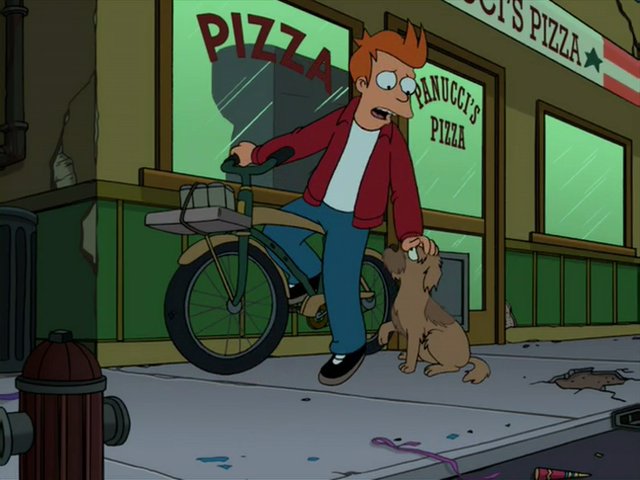 Seymour is an exceptional dog. He can bark “Walking on Sunshine” by Katrina and The Waves, he can swim in marinara sauce and eat meatballs at the same time, and he is unequivocally devoted to Fry. In return he is unabashedly loved by both Fry and Mr. Panucci. Seymour’s intrepid search and rescue mission makes Bender’s behavior in the thirty first century seem even more selfish by comparison. Unfortunately, when Seymour finds Fry at Applied Cryogenics he’s unable to get any human, including Fry’s own Y2K obsessed family, to open the cryogenic tube.

Of course, Bender doesn’t see any of this. But he does see Fry almost jump headfirst into molten lava to try to save his dog. As Fry cries Bender has an epiphany. “Fry, I’m sorry,” he says, “I should have understood how someone can love an inferior creature, because I love you.”

Up to this point in the series, it’s taken a cataclysmic event like the nuclear annihilation of an entire species (“Godfellas”) or the subjugation of a whole planet (“A Pharaoh to Remember”) for Bender to see the error of his ways and make a positive change. But this time is different because it involves Fry. And this isn’t the first or last time that Bender changes because of Fry. Bender is still learning how to be part of a human family from his relationship with Fry. Their friendship, as well as their friendships with Leela, are the most impactful catalysts of character growth in the series. And that is why, as an act of atonement, Bender risks his life by jumping into the lava pit and recovers Seymour’s fossil.

The Professor begins the cloning process and reveals that Seymour was fifteen years old when he died. Fry abruptly stops the procedure, thinking that Seymour had lived a full life after his disappearance. “I had Seymour until he was three. That’s when I knew him and that’s when I loved him,” Fry says, “I’ll never forget him. But he forgot me a long, long time ago.” 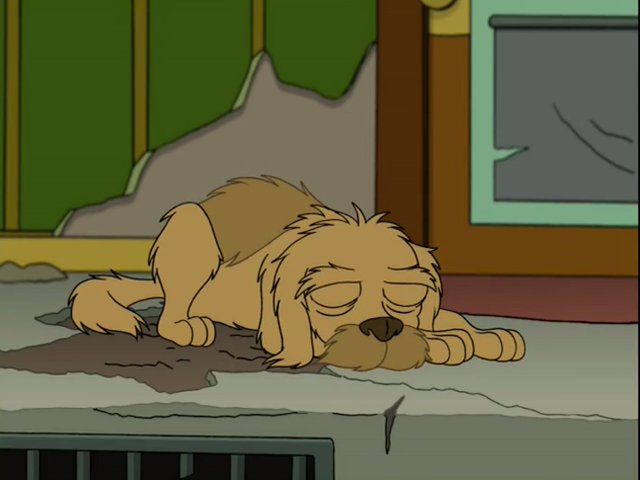 In the final flashback, Seymour sits in front of Panucci’s Pizza as the song “I Will Wait for You” from the film The Umbrellas of Cherbourg plays. He grows old and the seasons change around him. But still he waits just as he was told. And the episode ends twelve years later as Seymour lies down on the concrete and closes his eyes.

It’s impossible not to see the parallels between Seymour and Bender in this episode. Both of them are Fry’s best friend and both of them hit a significant obstacle that tests their character. But unlike Bender, Seymour never has a moment of doubt and his love for Fry never wavers. And he spends his life believing that one day Fry would fulfill his promise to come back, but he never does. And that’s the real tragedy of the episode, that Fry was Seymour’s best friend in the whole universe, but in the end Seymour thought that he’d abandoned him.

The majority of the episode is dedicated to Bender grappling with this question: how can someone (or something in the case of a robot) love an inferior creature? But in the epilogue this question is abruptly turned on its head. We see the other side of the relationship and we’re reminded how deeply a dog can love a human. Seymour is perceived to be the “inferior” creature but his loyalty and devotion is considerably stronger than his supposed superiors.

Imagine “Jurassic Bark” with a different ending. One where Seymour lives happily with Mr. Panucci or with Fry’s brother Yancy and his wife. Perhaps a slow tempo acoustic version of “Walking on Sunshine” plays as Seymour joyfully tears apart a customer’s pizza or chases Yancy’s son Phillip into some mud. Maybe the final shot of the episode shows him passing peacefully, surrounded by his new family, having forgotten all about Fry. It would have felt nice, but in my opinion, it would have felt wrong. 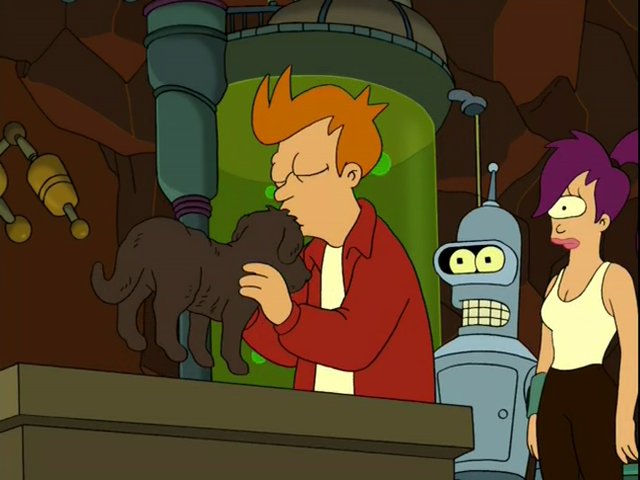 An ending like that would have unravelled the thematic connection between Seymour and Bender. It would have eroded Seymour’s position as the paragon of love and devotion in the episode. And it would have thrown all of the important relationships in the show into question. Because if Seymour could move on and forget his old best friend, what’s to stop that from happening to Bender, Fry and Leela one day?

The creators of the show were not afraid to tell the story the right way, even at the risk of devastating the audience. Whether you can stand to rewatch it or not, the ending of “Jurassic Bark” is the correct one for the story. In those final moments as Seymour waits for Fry the themes of love, loyalty and loss coalesce perfectly into a tragic but beautiful resolution. The ending transcends the typical animated sitcom formula and elevates the genre and the medium in a way few other show can. And it’s what makes the episode great. For that, the episode has left an indelible mark on theFuturama audience and continues to impact new viewers to this day.

Gabe Cheng left a career as a high school teacher and moved to Los Angeles to pursue his passion for writing and entertainment. He co-hosts the weekly Futurama fan podcast Another Lousy Millennium and the Kickstarter for his webcomic For Molly is going on right now.

View all posts by Gabriele Cheng