We’re more than a year removed from the most recent Star Wars movie and about half-a-year from the next Star Wars movie, and – I think – that ends up putting the Star Wars Fandom in an interesting position. If you follow a lot of big Star Wars fans on Twitter, you might have noticed a little meme crop up, something along the lines of these words:

“I’ve been busting my fucking ass being a Star Wars fan for five fucking years!”

That’s what Collider’s Kristian Harloff said in regards to recently not being offered an invitation to the opening of the new section of Disneyland, Star Wars: Galaxy’s Edge. His melt down can be found in two videos in a Twitter thread from @FilmGob. When it was pointed out to him that other writers from Collider would be attending the opening, he said he would still refuse to talk about it, because he wasn’t offered an invitation. For a lengthier explanation of the whole debacle, there’s this article by the Mary Sue.

A lot of people are calling this guy entitled, which I don’t think I disagree with. I don’t really get why he thinks he deserves to be at Star Wars: Galaxy’s Edge so much more than these other people who were invited, but he certainly comes across as thinking he’s the best thing since The Empire Strikes Back.

One of the things that really irks me about this guy is the way he explains that fans called him a “[Disney] Shill,” as though he’s some kind of martyr. Did he lie about liking The Force Awakens and The Last Jedi just so he could potentially get early access to Galaxy’s Edge? It definitely kind of gives the feeling that his status as a fan would result in him getting stuff, and then he got upset when it didn’t. 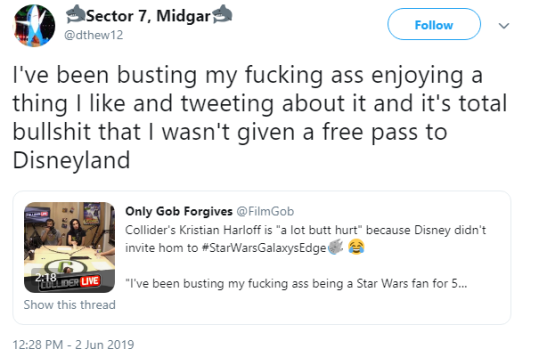 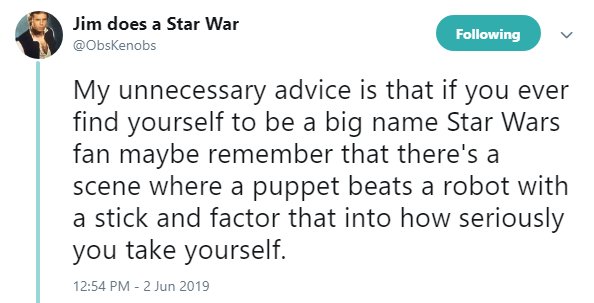 This probably wouldn’t be as irritating if it didn’t come on the heels of the petition from Game of Thrones “Fans” demanding that the eighth and final season be rewritten and redone with “competent writers.” Perhaps the most frustrating thing is that the people who started the petition must have logically known that this wouldn’t have been remotely possible.

Often, it just feels like “fans” of a franchise just spend an excessive amount of time just complaining about their disappointment, and not enough positive criticism. Just how much do you have to blindly complain about every little thing not going your way before you’re no longer a fan?

So let me end this post by pointing to an example of a fandom doing something great. After Game of Thrones Season 8 aired, it received backlash. Some fans liked it, many fans hated it. A petition was started to have it remade. And that petition was signed by over a million people, and must have been a huge, emotional blow to the cast and crew of the show. And it brought out the worst in the fandom. 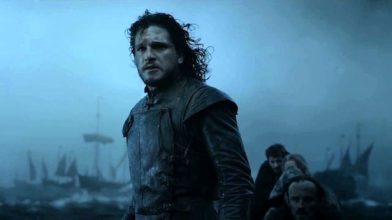 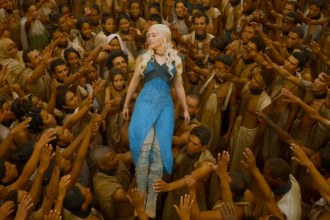 But those were just people putting their name on a petition; meanwhile, other – more genuine – fans were putting their money to real causes. As Emilia Clarke was publicly skeptical of the show’s finale, fans from the Game of Thrones Subreddit R/Freefolk have raised over $100000 for her charity for Brain-related injuries. As Kit Harrington checked into rehab for stress and alcohol after the final Game of Thrones season 8 was critically panned, a charity he has been involved with which helps learning disabilities has raised $45000 and counting. My heart goes out to Kit and Emilia, who are probably dealing with more stress than I ever will, but how wonderful it is that these fans can come together and do something to support them?

Being a fan of anything can eventually mean being disappointed in a new season or movie, but it’s important to never let your disappointment, anger, or bitterness overshadow the passion you feel for it.