A bit of a shorter post because I’m going on vacation this week – I’m actually going on a cruise that’s setting out of Bayonne, New Jersey, birthplace of George R.R. Martin. GRRM has described living there as a child and watching ships sail on the harbor and wondering where they were going, much like Sansa does with Shae in Season 3.

But anyway, since I’m away this week, I didn’t have time to write my full Journey to the Throne post for Season 7, so I just wanted to mention one scene form that season which stirred up way too much controversy. 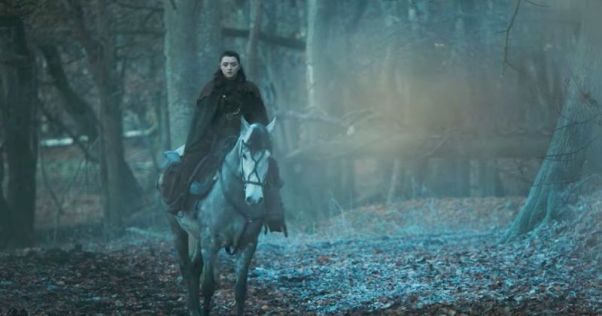 Maisie Williams who plays Arya was well-documented as being a big fan of English pop singer Ed Sheeran. So, as a fun little prank, the showrunners gave him a cameo appearance. No harm, no foul right? But the internet reacted, as they often do, and they were livid. Many people thought the scene was unnecessary, while many had no reaction at all.

I had forgotten all about this scene, but it’s relevant again because Andrzej Sapkowski, author of The Witcher, was talking about the Netflix show which he’s serving as an EP on, and said that his job as an creative consultant was to make sure that Ed Sheeran didn’t sing.

This scene is honestly not bad – the camera pans over Ed Sheeran’s face for a bit of a long moment and does have a bit of “Eh, see, look at this cameo!” – but otherwise, I think it’s good. Characters sing in Game of Thrones, that’s not unusual. And I think that her conversation with the Lannister soldiers is poignant because of how she goes there expecting to kill them, but then realizes that they’re just people who miss their families and have actual lives. (It makes a nice contrast to the scene in Season 3 where she sees Frey soldiers bragging after the Red Wedding, and just murders them.)

As far as the worldbuilding goes, I like the fact that the Lannister soldiers have a song about people with golden hands, as an expression of admiration for their liege lord.

Honestly, I think it’s cool that someone as popular Ed Sheeran would want to do something like this. I think he might be a bit of a fantasy fan as he also did a song for the second Hobbit movie, “I See Fire,” which is pretty good so far as I can tell.

And I mean, especially now that we live after Season 8, this scene is really put in perspective. Does it go against everything we know about this character? No. Does it rely on plot contrivances that are way outside of the bounds of being considered reasonable? No. Does the fact that you can so easily recognize Ed Sheeran impact the scene? I don’t know, maybe a little?

I just think that if Andrzej Sapkowski really wants to make sure The Witcher is good, he should perhaps consider the misshaps of Season 8 rather than aggressively poo-pooing celebrity cameos. There were a few things wrong with Season 7 and a whole plethora of things wrong with Seasonn 8; Ed Sheeran’s cameo certainly seems to be the least of them. The reaction on Twitter serves as a reminder of a simpler times, when people still loved the show almost unanimously.