These are scary times we’re living in. COVID-19 has the world in its grasp, with thousands of more people contracting the disease every single day. Experts suggest maintaining “social distancing” and not leaving your house if not entirely necessary.

With businesses shutting down, the economy has unsurprisingly taken a hit, with stocks spiraling for a few weeks now. President Trump wishes to reopen the economy by Easter, two and a half weeks away. (Good luck there, buckaroo.) Experts generally seem to suggest that a longer period of quarantine and social distancing will be needed before the virus is contained enough for Americans to go back to work.

While I think that Trump saying that he hopes Americans can get back to work soon is likely nothing more than wishful thinking, but many people in his camp have started suggesting that the risk of disease and death will be worth it if American can get back to work. 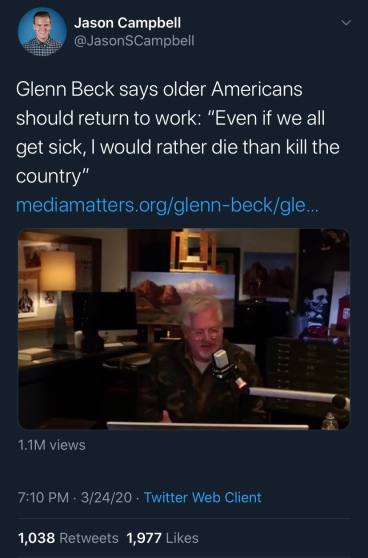 Perhaps most egregiously, Lieutenant Governor of Texas Dan Patrick recently went on Fox News to expound on why he thinks social distancing rules should be lifted; he thinks Americans should get back to work as soon as possible.

“No one said to me, as a senior citizen, are you willing to take a chance on your survival, in exchange for keeping the America that all America loves for your children and grandchildren? And if that’s the exchange, I’m all in. … My message is: Let’s get back to work. Let’s get back to living. Let’s be smart about it, and those of us who are 70+, we’ll take care of ourselves, but don’t sacrifice the country.”

I do my best not to take sides on political matters here, but I don’t think that wanting to remain in lockdown so that more people don’t get infected and potentially die should be such a polarizing idea. Thankfully, the people who have been spouting the notion we should all go back to work sooner than possible are being roasted mercilessly in the discourse, as well they should be.

In moments like this, I find myself escaping into fiction. I’ve got a TBR-pile of long fantasy books that I want to get to during this time of self-isolation, one of which is the second book in Brandon Sanderson’s Stormlight Archive series, Words of Radiance. I read the first book, The Way of Kings, last Spring, and I loved it. It’s a hefty book of over a thousand pages, but the story it tells is compelling and beautiful. The last hundred pages have enough plot twists for five books.

One of the main characters of The Stormight Archive is Dalinar, a middle-aged warrior-knight who is uncle to the king. Dalinar is constantly saying incredibly wise things. He seems to be the Uncle Iroh of this series, a fan favorite who seems to make the Stormlight Archive what it is.

Towards the book’s end, Dalinar and his soldiers are saved by a team of slaves (who are owned by his enemy, Sadeas). He trades his magical, sought-after sword he has – called a Shard Blade – for the ownership of those slaves, who he then frees. In this world, Shard Blades are incredibly valuable, making the person who wields them nearly unkillable. The book spends so much time emphasizing the value of Shard Blades, that by the time you reach this point, it’s clear just how big of a move this is.

“What is a man’s life worth?” Dalinar asked softly.

“The slavemasters say one is worth about two emerald broams,” Kaladin said, frowning.

“A life is priceless,” [Kaladin] said immediately, quoting his father.

Dalinar smiled, wrinkle lines extending from the corner of his eyes. “Coincidentally, that is the exact value of a Shardblade. So today, you and your men sacrificed to buy me twenty-six hundred priceless lives. And all I had to repay you with was a single priceless sword. I call that a bargain.”

These lines were the first things I thought of while reading all of the discourse of how much a life is worth. The Stormlight Archive is part of Sanderson’s larger, overarching universe, called the Cosmere; many of the works in this universe seem to be concerned with this theme. The Way of Kings has Kaladin and the Bridgemen, Mistborn has the Skaa, and Elantris has its diseased citizens; through all of these stories, we see the plight of subjugated citizens for the benefit of others. And consistently, throughout each, it becomes clear that this subjugation is something evil; treating humans as expendable is evil.

The Coronavirus will continue to take a toll on the American economy, but The Way of King reminds us: A life is priceless.

What are you reading/watching/playing currently?