:
Picking up where I left off last week, I cover the next five episodes of one of my all-time favorite sitcoms, Community, telling the story of a study group at a highly disfunctional community college.

Synopsis: “Annie’s dream of being the ex-football star’s girlfriend is in jeopardy when Jeff is blackmailed into getting Troy to join Greendale’s football team.”

In this episode we get a little bit more of Dean Craig Pelton, who had his first significant speaking role in Episode 5. And here, he’s got a bit of a larger role and definitely more of character agency. He puts Jeff in the advertisements for the school, and when Jeff asks him to be removed, the Dean kind of blackmails him. It’s an interesting angle which further shows what the Dean is like, but the most hilarious thing the Dean does in this episode revolves around the football team called “The Human Beings.” When asked about the name, he says that most of the players on the football team “have been called animals their entire life,” which comes across as moderately endearing and over-the-top politcally correct. This leads to the absolutely grotesque and hideous Human Being mascot, who shows up throughout the series. This is slowly becoming the Dean that we know and love.

Out of everything that’s come out of Season 1, nothing has gotten screenshotted quite as frequently as the conversation between Troy and Jeff:

Jeff Winger: I’m locked out of my old kingdom. You’re not. You see what I’m saying?

Troy Barnes: You’re saying I could be a lawyer.

Rightfully so, that’s absolutely hilarious. And Troy gets a few other hilarious lines, like his conservative football raps.

And this episode is decent from a character angle as well. Annie learns to support Troy, Jeff learns to be more sympathetic to Annie, and when Jeff tries to explain that to Troy that he doesn’t need to join the football team just to bail him out, Troy explains that he likes being part of a team, at the expense of the other players. Side note, that scene where he’s in the locker room getting ready for the pep rally and they keep dissing the players, and the ginger guy is like “Hey, we’re right here.” It’s a really funny visual gag that plays on fundamental understanding of sitcoms; this would be a totally normal conversation for sitcom characters to have normally, and they usually say these things in earshot of characters they’re talking about. It’s really funny.

Synopsis: “Jeff sets his sights on an attractive professor with a firm policy against dating students, Annie looks to boost her social standing and get extra credit in Spanish by hosting a Day of the Dead party.”

One of the strengths of this episode is Jeff’s interpersonal relations to some of the other characters. Particularly, Professor Slater, Chang, and Pierce.

This is the first episode where we meet the Statistics Professor, Michelle Slater – hence the episode title. Slater is the first love interest for Jeff outside of the Study Group, and they mesh really well together. It’s an interesting dynamic to have with these two verbally sparring as equals, but their different stations add some tension to the story that make it interesting. Having a romantic pairing between a professor and a student doesn’t exactly make for Romeo and Juliet, but it gives the characters just enough of an obstacle to overcome before they get involved. You like Jeff, and you like Slater, so that when they start to hook up, it feels earned and you feel invested.

…Which leads me to Jeff and Pierce. Jeff leaves his pursuit of Professor Slater to go take care of Pierce. Pierce’s story this episode focuses on his fear of growing old and dying, which are exacerbated by a bad drug trip. (Side note, the things that Pierce sees when he trips include skulls and Annie doing a sexy dance while saying “Tell me about Woodstock, Pierce… tell me about the Beatles, Pierce…” And that’s hilarious.) He constructs a tower of chairs and desks which will collapse and kill him as soon as he pulls out the thing holding it up, and Jeff talks him out of it. Jeff makes a compelling case, convincing Pierce that he isn’t dying because he’s living life so vibrantly. Jeff rags on Pierce a lot, so this genuine moment feels like an important contrast.

Also, we get some interaction between Chang and Jeff, which at this point in the show, kind of regard each other as equals despite one being a student and the other being a teacher. We’ll see more of these two in later episodes this season, but they play off each other surprisingly well in season 1. It’s confounding because I can’t quite put my finger on why.

This episode has one simple joke that makes me laugh every time I hear it, when Slater introduces herself to Britta:

This episode has the first appearance of Abed as Batman, who is absolutely gold in this episode. In addition to having a bunch of lines that are made riotously hilarious just by Danny Pudi’s Batman voice, he actually gets a pretty considerable subplot. After Abed spends a good deal of time Batman-ing around the party, Jeff is mean to him for going too deep into character. Abed seems genuinely hurt at this. But, at the end of the episode, as Pierce’s deathtrap is collapsing with Pierce and Jeff in it, Abed goes full Batman and saves Jeff and Pierce. The moment doesn’t quite make sense logistically – like how could Abed get in without getting hurt by the – but who cares, it’s a great scene. It pays off when Jeff addresses Abed as Batman, and Abed gets a monologue to bring the episode to a close.

Favorite Moment: Troy and Abed compare their Batman voices during the credits

Synopsis: “Study group members try to help Jeff when they learn he is living out of his car; Pierce joins Vaughn’s (Eric Christian Olsen) band.”

The progression of Pierce in this episode is absolutely delightful, and is one of the best early Pierce plotlines. First, Pierce says that he’ll talk to Vaughn on Britta’s behalf, even though Britta doesn’t want him to. Afterwards, Pierce says that he couldn’t get through to him but, that he’s instead joined Vaughn’s band; and I remember my first time watching this scene, when I was absolutely cracking up at that. Then we get to see Vaughn’s band, and then they have the “Gettin’ Rid of Britta,” song in which Vaughn and Pierce call her a “B.” Vaughn and Pierce have a disagreement, and Pierce gets kicked out of the band, Vaughn writes “Pierce, You’re a B” which is played at the end of the episode. This was one of few early episodes in which you could argue that Pierce is the main character for this specific episode, so much so that the end-credits stinger, which featured Troy and Abed in the first seven episodes, focused instead on Pierce’s diss-track about Vaughn.

Jeff gets a bit of an interesting plotline for this episode, in which living with Abed makes him a bit of a slob and Britta needs to re-teach him the importance of… material possessions? It’s an interesting premise for an episode. The story isn’t amazing, but it’s still pretty amusing.

Overall, “Home Economics” has some grey moments that elevate the episode from fine to quite good. Putting Pierce forward certainly makes for an interesting change of pace that really, really works here.

Y’know what kind of comedy trope really tickles my fancy? Comedy villains who present themselves as being kind and good, but are really complete jerks. So in this episode, when Jeff and Annie join the Debate Club, their opponent from City College is a young in a wheelchair who has to argue that Man is inherently good – but then, behind the scenes, he’s an asshole. That’s great situational comedy – you’d think that having being differently abled and trying to argue that Man is good would make him more sympathetic, but it doesn’t. It’s really funny.

This episode also has the first moment where Jeff and Annie are presented as a viable couple. I routinely ship Jeff and Britta over Jeff and Annie, but in this context it makes sense. The two get distracted while preparing their debate argument – Man is Evil – because they’re attracted to each other. It almost derails their debating preparation, but it ends up being the debate’s saving grace. It’s a good example of two plot threads being properly entwined together.

I thought I’d have a lot to say about Abed’s movies predicting the future, but I don’t. It’s a solid goof; seeing the actors that have been chosen to play the characters is a great meta-moment. This also gives us a classic Troy line, “Why [will I be] crying? Will I listen to ‘Come Sail Away’ by Styx again?” And the episode ending with Abed realizing that it’s a full moon after assuring Shirley that she wouldn’t get chased by a werewolf like in his movie – that’s a solid way to end the episode.

Favorite Moment: The conclusion of the Debate; it feels very earned

Synopsis: “When his friends ask him to do something about the amount of Spanish homework, Jeff’s efforts to handle Senor Chang manage to help him, but not the rest of the class.”

This episode has more of the Jeff and Chang pairing, which is really good, but it doesn’t have much else. Jeff helps out Chang reconcile with his ex wife. It’s interesting to see the two of them bond, but the thing which makes it funny is knowing that Jeff is just doing it out of self interest and to help the Spanish class. Jeff seems like he’s doing it out of his own self-interest, but he doesn’t just help Chang heal from his divorce, but actually reunites him with his ex-wife. 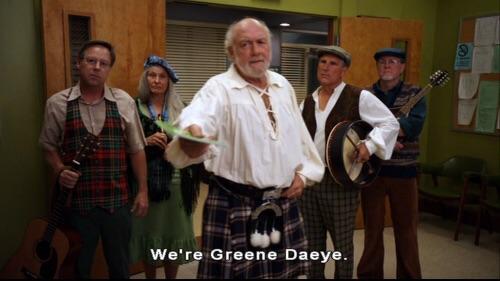 This episode has subplots – Troy and Abed in Biology, Shirley in Marketing – but they’re nothing phenomenal. Something that’s certainly worth appreciating is some classic Greendale Dysfunctionalism; they have a “Green Week,” for which they hire a band Green Day, only it’s not Green Day, it’s Greene Daeye, a celtic rock band. It’s quite funny, and Greene Daeye helps set the hilarious scene for Chang and Mrs. Chang’s salsa dance.