I had planned on writing this post in February, and then got distracted. I assumed that I’d never be able to finish it before the movie came out… Boy howdy, did life have other plans!

When talking about the 2019 Lion King movie, my friends and I were discussing the casting (recasting?) of James Earl Jones as Mufasa, which he had played in the original animated classic in 1994. A friend of mine said it bummed him out, because he wished they’d do something more ambitious. At first, I kind of disagreed, but then someone raised the question of “What if James Earl Jones voiced Scar instead of Mufasa?”

And listen, I’m no expert in the science of Hollywood casting, so there’s probably some esoteric reason why this couldn’t have happened, but as soon as the possibility entered my mind, my imagination went absolutely wild. How cool would that be! It would be such a unique and creative angle for the movie to take. 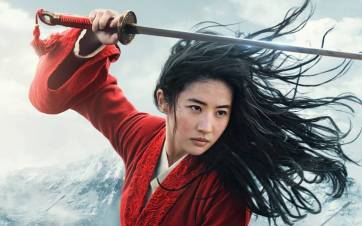 That conversation was had early on, prior to any trailer was released. And when I finally did see the trailer, it was a rather disappointing experience. “Oh,” I said, “They’re doing a shot-for-shot remake of the original.” After that, I didn’t have any interest in watching 2020’s Lion King. (But y’know what, I love Donald Glover/Childish Gambino, and if I get one comment telling me that the soundtrack is worth listening to, I’ll check it out.)

Which brings us to Mulan, which seems so eager to change so much stuff about the original that it has been irritating its potential fans. To be fair, at least one of these things are done to appeal to international – namely Chinese audiences – and it’s worth having a debate if that’s a fair move for the studio. As much as I like to hope that movies are made with quality in mind over profits, I understand why this isn’t the case. Most studios want to make a movie that appeals to box office numbers rather than critical numbers. Plus, seeing as this movie is about China, I think that doing everything they can to appeal to China makes sense. That’s where a hugely significant portion of the box office profit will be.

That actually brings me to the music, which supposedly was changed to appeal to Chinese audiences; the story won’t pause for the characters to sing the songs which made the movie iconic, like “I’ll Make a Man Out of You” or “Reflection.” But, looking at the trailer, it appears that these songs – or at least, “Reflection,” will appear as part of the musical score.

And I think that, given the style this movie seems to be going for, I think that’s the right move. Having the characters stop to sing, it just wouldn’t feel right. Plus, the characters in “Mulan” only stopped to sing a few songs; the two mentioned above, as well as “A Girl Worth Fighting For” and “Honor to Us All,” both of which are certainly less memorable than the two I mentioned above. So if these songs were replaced with a powerful score, I think it would make for an almost equal impact.

Unfortunately, the soundtrack was not the only source of fans’ ire…

There’s no Mushu, which everyone is very up in arms about. Mushu was certainly something I loved about the original, but he was never the only thing for me. He’s funny and brings a certain hart to the movie, so I can clearly understand why his removal has so many fans worried.

Also, hot take – I feel like Mushu wouldn’t translate well to live action. He’s cartoony and acts like a person in the body of a lizard-dragon, and that wouldn’t work in live-action, I don’t think. For every proper insertion of a cartoon character into a real-life movie, there’s another example where it looks uncanny. For every Detective Pikachu, there’s a first run of Sonic the Hedgehog. For every Pirates of the Caribbean, there’s Cats.

In place of Mushu, there will be a magical phoenix. It looks neat, and matches the visual style of the movie more.

Li Shang, Mulan’s commanding officer in the original film, will also not be in the remake. In an interview, producer Jason Reed said that this was due to the #MeToo movement, and that having a superior officer who was also a sexual love interest felt problematic. This feels like an overreaction to what would likely have been a relatively small controversy. It reeks of the kind of stuff Lindsay Ellis highlighted in her video essay “Woke Disney,” that pointed out how hollow some of the Feminist overtures of the live action remakes. They could have just as easily included Li Shang, but not made him a romantic interest for Mulan. I do have some misgivings about excluding him, but honestly, it probably won’t be that big of an issue. I feel like if 2020’s Mulan ends up being bad, Li Shang’s exclusion won’t be the reason why.

And people have said that the movie looks a little too serious, but post-Game of Thrones, you knew that this was going to become an epic fantasy medieval film, and that it’s gotta be all serious. That kind of story initially might seem outside of the Disney wheelhouse, but that makes me all the more excited that they’re trying it. And Mulan seems like it’d be a better fit for than something like Beauty and the Beast or Aladdin or Hercules would be.

The reasons they’re making these decisions seem to be misguided, but they’re at least trying something different. Frankly, I think that should be praised. For a change, it feels like one of these movies is trying.