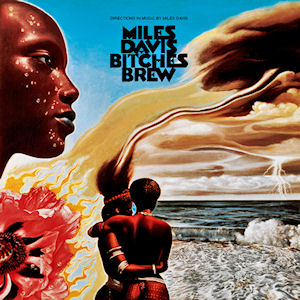 Miles Davis’ album, Kind of Blue, is everything you’d expect bluesy, jazz to be. It’s soft, mellow, and just a touch melancholy. Each song gives a variety of solos that give each instrument in the traditional jazz lineup a time to shine. In many ways, it’s the perfect jazz album – and often to considered to be one of the best albums of all time, jazz or otherwise. It’s the perfect soundtrack to have a quiet evening in, or to drive your car during a rainy night. It’s occasionally lively and often subdued.

On the other hand, Miles Davis’ Bitches Brew, is almost none of those things – except, perhaps, lively. (And critically praised.)

That might sound like I’m speaking ill of this record, but it is a unique listening experience that I can’t stop thinking about.

The record is a totally different experience to listen to when compared to Miles Davis’ other most popular albums. The instrumentation is noticeably changed – standard pianos have been switched out for a electric keyboard, and distorted electric guitars and bass guitars that completely change the focus of the album. It would be one thing to start using electric instruments, but the melodies are atonal, and honestly, difficult to listen to. Bitches Brew is not a pleasant listening experience. I would describe the music as being in a minor key, but it almost feels like it’s in no key at all.

In particular, the title track “Bitches Brew” is one that makes for an incredible listening experience constantly shifting tempo and using an eerie echoing effect, there are certain stretches that sound like you’re slowly descending into a horrifying nightmare. I’ve never had any kind of music create this kind of tension in me.

The music is uncomfortable and fills me with existential dread that makes it honestly perfect to listen to while reading… but, only for certain books.

There’s plenty of books I like to listen to this music to, not usually because it sets me at ease or dresses the scene perfectly, but because of the general mood it creates. Bitches Brew creates a sense of unease that is perfect for reading books that makes you feel uneasy. I think it’s perfect to listen to while reading books by Kafka or Lovecraft, stories that fill you with dread and a fear that goes deeper than things that go bump in the night. Similarly, I love listening to it while reading Stephen King’s Dark Tower books, which similarly shows a multiverse that is infinite and terrifying. In terms of nonfiction, I listened to Bitches Brew while reading Michelle Alexander’s stunning indictment of America’s criminal justice system The New Jim Crow. The dissonant sounds of Bitches Brew are a certainly appropriate soundtrack to listen to while trying to understand the way our democracy has failed black people since its very beginning.

Obviously, the music doesn’t work for every book, but when it does its incredibly effective. I’m sure other (instrumental) records or songs that could create a similar feeling of anxiety and fear are out there, and would probably also be good for the background for any reading that breeds horror on an existential level – both fiction and nonfiction.

Bitches Brew takes all of your preconceived notions about jazz – a genre which is often said to have few rules – and then throws those notions out the fucking window. If you are a novice to jazz (and I consider myself to be) you might make your way down the discography from Kind of Blue to Bitches Brew will get whiplash. You might think jazz is the musical equivalent of free-verse and completely lacking in any structure, but Bitches Brew disproves that by completely throwing casual listeners out of their comfort zone.

It would be dismissive, silly, and wrong of me to say that anyone without a ~distinguished musical palette~ would listen to Bitches Brew – it’s fine if you don’t enjoy it. I don’t even know if I enjoy it – I just feel its power when listening to it under rather specific circumstances.