July 2, 2019July 2, 2019 Author by Andrew RainaldiPosted in Game of Thrones, Journey to the Throne

In my last Journey to the Throne post, I mentioned that the final two episodes of Season 6 – “Battle of the Bastards” and “The Winds of Winter” are arguably the show’s two best. In the title of that post, I identify this point as when the show peaked.

Well, when you peak, there’s only one way to go: Down.

I find it easier to address Season 7 as one large piece, rather than breaking it up into several posts as I’ve done with the previous season. The successes for this season feel fewer and farther between, whereas the problems feel more homogeneous from episode to episode. That is to say, there are a few blanket criticisms that plague this whole season.

The main criticism of Season 7 is that it often feels rushed, and I definitely agree with that. It feels like watching a game of chess in double time. Characters just show up wherever they need to be, they do improbable things just to push the plot forward. And at other times, it feels like they just expect us to be wowed by the novelty of two characters meeting each other. There’s a distinct shift in focus; it’s no longer about characters and the journey they take and the consequences which force them to grow, it’s just about events. These problems do become much more pronounced in Season 8, but they’re definitely worth mentioning here.

I love Arya being back in Westeros and taking out house Frey – especially since I didn’t love her story in Braavos – but then she goes North, and we get her and Sansa setting the trap for Littlefinger, which for one reason or another, just doesn’t really work. It’s funny because I can’t quite place my finger on what doesn’t work about it, only that it doesn’t. The final moment where they pull the rug out from under Littlefinger is so goddamn satisfying that it manages to somewhat salvage the plot-line and ultimately this will make Arya’s Season 8 loyalty to Sansa over Jon a little more believable.

It’s worth noting that Bran gives her the dagger she will use to defeat the Night King in the exact spot where she will eventually do it. In fact, I really like Bran using his omnipotence in Season 7 – the moment when he quotes Littlefinger’s “Chaos is a ladder” speech back at him made me jump for joy. (Also, why didn’t Bran doing that tip Littlefinger off that he was clearly in deep shit?)

The same show that gave us villains as complex and engaging as Cersei, Joffrey, Tywin, Littlefinger, and Ramsay still wants us to think that Euron still qualifies as a villain. I hate that the cast and crew kind of hyped him up as being the most terrifying thing since Ramsay, when really he’s a glorified support character to Cersei. But, to be fair, this season does have has WWE-style entrance into the sea battle, and it’s pretty metal.

One thing that many people disliked about Season 7 is the plot to go beyond the Wall and take a Wight to prove to the Seven Kingdoms that the threat of the Army of the Dead is real. A lot of people criticize the plan as being beyond belief, but this is something that I can kind of get behind, for two main reasons.

First, the show does a decent job of demonstrating just how unwilling people are to believe in the Army of the Dead – given that it’s often read as an analog for climate change, it’s no surprise that the Westerosi have such a hard time believing in it. Think about it in equal terms; if there were a way to prove, once and for all, to deniers that it were a real and palpable threat, would you risk your life to do it? Certainly someone would. In both the book and the show, ravens are sent alerting the capital of the danger, and Aliser Thorne gets sent to King’s Landing with the remains of the Wight that attacks the Lord Commander at the end of Season 1. So it makes sense that Jon, Tormund, the Brotherhood, and everyone who recognizes the threat of the undead would so eagerly partake in a plan that the viewers deem as illogical.

Second – and this, I will admit is more of a personal preference – I like that it makes for a self-fulfilling prophecy in the end. The Army of the Dead only becomes a threat because they have a dragon at the end of Season 7 – they only have a dragon because Daenerys wanted to save Jon – Jon only needed saving because he wanted to prove that the Army of the Dead was a threat. Most people will say that it just happens this way because D&D or GRRM couldn’t think of a way for the White Walkers to get over/around the Wall, and maybe that is, but I think it makes for some neat cause-and-effect. (And, given that Bran ends up on the Throne at the end, one could definitely wonder just how much of this he orchestrated. We’ll talk more about Bran a little bit further down the line.)

But that actually relates to my next point; the Dragon battles. We do get to see the dragons in interesting combat situations; the Loot Train attack and the battle beyond the Wall both show how the dragons fare against the living and the dead. I still remember how out-of-my-mind excited I got when I saw the shot of the Dothraki and the dragon coming over the hill.

The Loot Train battle is certainly one-sided, but still manages to be exciting. The continuous-shot sequence in which Bronn fights his way through the fire is thrilling and beautiful; Jaime’s charge towards Daenerys and Drogon (though absolutely suicidal and impossible to survive) makes for an impressive sequence.

The Dragon-Ex-Machina from “Beyond the Wall” is well-done. The whole battle with the dead coming closer and closer feels just depressing enough to make you temporarily forget that Dany is on her way, so that when she arrives, it feels well-earned. And in a previous post, I compared this episode to the one in Season 8 when Rhaegal dies, and it’s just kind of absurd how this feels like it’s done so much better than it is there.

Season 7, more so than the ones that came before it, was clearly messy and flawed. That being said, there definitely some excellent moments that are worth remembering. As I have done for every episode of the series so far, here are my favorite scenes from every episode. 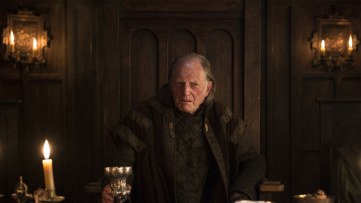 Episode 1 has two – the ultra-satisfying cold-open and cold-close. We see Arya and Daenerys achieving some of their longterm goals.

This episode is pretty standard fare for this early in a season, but we do get this absolutely stacked small council meeting of Daenerys, Tyrion, Olenna, Yara, Theon, and Ellaria. Even if one of this season’s bigger missteps is just throwing a bunch of characters together and hoping it makes for a good scene, the novelty still hasn’t worn off by this point. Olenna and Daenerys get to have a meaningful conversation in which you get to see the two get along and Olenna get some true-to-fashion Olenna Witticisms. Also, it’s worth noting because Daenerys is one of few characters – Tywin Lannister is the other one I can think of – that Olenna doesn’t spend half the conversation insulting.

Look, did you think it was going to be anything else? Olenna Tyrell – she dies as she lived: absolutely fucking savage. Her enemy shows her mercy, and she admits she killed Joffrey. Her last line of “Tell Cersei, I want her to know it was me” is one of the best in a long, long line of witticisms from the Queen of Thorns.

Episode 4: “The Spoils of War”

The Loot Train Attack is a case where I can’t overstate just how great it is. It’s our first significant taste of the human toll that the dragons can exact in battle – it’s a tiny taste of the devastation that we’ll see when Daenerys takes King’s Landing. Again, we’ve seen the Lannisters, the dragons, and the Dothraki in battle in previous episodes, but combining them here creates a wholly unique end product. 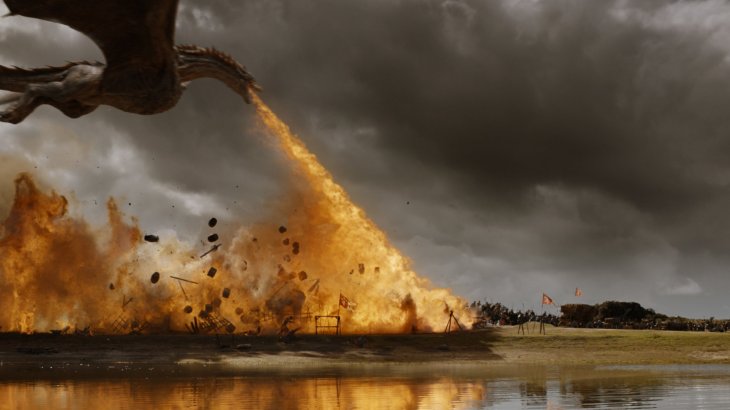 The above shot of Drogon shooting fire in a straight line and destroying all the carts is probably this season’s most iconic contribution to the whole show. (And I mean I suppose doesn’t make sense strategically, you could take those supplies but also whatever who cares.) Like every great piece of mass media, the Nerd Writer on youtube has a video essay about the Loot Train Battle, and I’d definitely recommend checking it out. 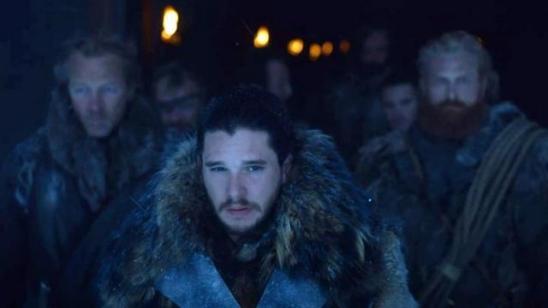 Listen, I’m a sucker for a good hype train. I remember watching this episode and getting so excited about the next one. We had no idea what could happen, who could live or die! Those last shots of Jon’s team going beyond the Wall were great! This group, dubbed “The Magnificent Seven” by some were going out, into the great white North and into the internet meme cycle.

Episode 6: “Beyond the Wall”

Listen, hot take, I love this episode. I don’t know if I made that clear up to this point, but I really like it. I get that not everyone can get behind the pretense of their journey north, but I think that once you stop thinking about the logical inconsistencies, it’s really fun.

There’s a lot of great character interaction here, and it’s hard to pick just one. And the action scenes are scary and well-choreographed. But if there’s a single moment from this episode I really like, it’s the Hound’s “Oh fuck” moment where things start to really go down; the wights realize that the ice has frozen over, and the living realize that the battle is going to begin in earnest. Things quickly go from “hang tight till Daenerys saves us” to “any of us could die at any moment.”

Episode 7: “The Dragon and the Wolf”

The Dragonpit has a bunch of characters crossing paths, and I could point to any of these crossing paths as one of my favorite moments. Tyrion is reunited with Podrick and gets his proper reunion with Bronn. Daenerys and Cersei butt heads. The Hound and Brienne talk about Arya like parents with shared custody.

But perhaps my favorite moment from this episode is the stand that Theon takes. He boldly announces that his ironborn will be going to rescue Yara. This fight is a better story moment than any fight Euron is in, hands down.

And Theon being unaffected by a kick to the groin goes back to what we heard in the very first episode of the show, when Tyrion tells Jon not to forget what he is and to “wear it like armor, and it can never be used to hurt you.”

Theon’s had a lot of antagonists that loom tall in his plot lines – Balon, Ramsay, Euron – and his fight with the unnamed Ironborn character here is a powerful moment where he’s really standing up for himself. It’s a great moment which really stands out as more character-driven than plot-driven, which in Season 7 was a rare enough thing.