On October 11, 1975, Saturday Night Live debuted on NBC, late night sketch comedy series with the gimmick that everything would be performed live. For the past 44 years, the show has continued to air, having a massive influence on US pop culture and US comedy in general.  And for nearly as long as  the series has been on the air, there has always been a contingent of people saying the show isn’t funny anymore…

Now look, there is a ton of criticism you can lobby against the show and what it means for comedy.  In fact, you can fill an entire book about it, so we won’t get into it in this blog series.

Saturday Night Live is a strange beast of television.  For starters the series is a 90-minute program built completely from scratch in one week, then performed live.  There is still no other show quite like it on TV, because it lacks the conventions of other comedy shows (i.e. editing, improved effects etc.)

On top of that, because of the insane time constraints you can argue that SNL has a weaker output/percentage of good sketches when you compare it to other sketch comedy shows on TV, and it would be really hard to disagree. Just think about some of the cast members that have had no impact on the show but have gone on to do amazing things (Ben Stiller, Sarah Silverman, Robert Downey Jr.) compared to a ton of cast members that have had success on the show, but haven’t been able to do as much in their post-SNL career.  It’s impossible to consider this show to be a metric for talent.

And I think that might be the best way to view the show.  Watch 15 or so top comedy performers do whatever they want, and see what sticks.  So in order to honor this show I love, I decided to countdown 100 of the best sketches the show has had this decade

My Totally Scientific and Objective Method to Rank These Sketches

Now with something as subjective as comedy, you’re probably wondering how it was even possible to try and put together an accurate list, and what methodology was used.  And I bet I know what you’re thinking:

“Oh, he must have reached out to former cast members and staff writers to ask for their favorite sketches! That way we can get a fresh perspective from the cast, and maybe some fun behind the scenes anecdotes!”

Well that sounds like a great article that I would love to read.  But unfortunately that requires a lot of celebrity contact info that I don’t have.  I’ll leave that list for the bigwig rankers at Vulture to make when they’re done ranking every episode of Mad About You. So you’re probably thinking…

“I guess he went through the sketch uploads on YouTube and saw which ones had the best like to dislike ratio, and then ranked them in order.  That way it accurately reflects the general consensus of what people like”

That method probably would’ve made my life easier. But truthfully, I’m not a huge fan of some of the more popular sketches. (Maybe it’s because I think being a contrarian is a personality) Also, I feel like this method excludes a lot of the bizarre “10 to 1” sketches that might have an ambitious style. Personally, when the show goes for broad comedy that appeals to everyone, it often feels pretty weak to me. So you’d probably assume…

“I’m sure this jackass at least tried to reach out to a handful of other people to compile this list.  That way it reflects a variety of people’s opinions and we’ll get sketches with different comedy tones, and probably a bigger variety of cast members”

Look, this blog is understaffed and I don’t have that many friends.

In order to compile this list, I went to the official SNL app (which is great for all fans of the show BTW) and I went through the selected sketches of every cast member from 2010-2019.  And from that I picked the ones that I laughed at the most. Basically it was measured by a barometer of me. In a way, this list may actually say more about me than it does about the show

So look, please don’t take this as some sort of ‘definitive’ or ‘objectively accurate’ list.  Instead, just consider this to be one fan of the show talking about his favorite sketches/performances.  So, let’s take a trip through the past 10 years and look at some sketches that we loved, forgot about, or never saw, and hopefully have some laughs!

It’s no secret that SNL and Justin Bieber have not gotten along in the past.  So Kate McKinnon parodying the tween star as a beefcake is a brilliant takedown.

Bill Hader sells the sketch as true crime reporter that is way too enthusiastic about the gruesome details of a murder.

Cecily Strong turns down male feminists at a bar.  It’s a look at the false progress some guys use as a pickup tactic. But I think the real credit may go to the wardrobe department.  Every one of these guys look like the most generic ‘Resistance Bros.’ out there

What if poet and civil rights activist Maya Angelou hosted a prank show? It’s a joke so absurd it works.  Plus, any excuse to have a Maya Rudolph lead a sketch is worth it.

Kyle Mooney’s man on the street interviews are a ton of fun.  But I think the Circus is probably his best. Watching this socially awkward guy interacting with kids is hilarious because they don’t care about hurting his feelings, or interacting with him.

Lifetime original movies feature some of the most melodramatic acting, so seeing Anna Faris slide into this role is fun to watch.  But the real star of this is probably Bill Hader, you’ll definitely know what I’m talking about.

There are certain tropes of every procedural drama, and teenage killers are one of them. Melissa Villasenor lands the fake tears and beats of a high school student who ‘accidentally’ killed their friend.

Zach Galifianakis plays the worst co-worker of all time. The sketch shows off Galifianakis comedic delivery.  But really, just the visual of a man dressed as an M&M saying offensive things will always be funny.

A controversial pick. Luke Null didn’t get a ton of screen time in his only season as a cast member, and this practically his only lead performance in a sketch.  The idea of being unfunny and having the whole audience hate you is a polarizing idea, and I don’t think the audience was really into it. But I thought it was funny, and I really respect taking that big of a risk with a debut sketch.  It was a unique choice, and I really hope we get to see more of Null’s humor in his post-SNL career.

Nickelback has spent the better part of two decades being the butt of jokes for awful music.  Leave it to this sketch to try and change the story. Melissa Villasenor and Sterling K. Brown are having the time of their lives belting out “How You Remind Me”

Beach party movies were a thing in the 60s, and are ripe for parody.  This also might be some of the most elaborate prop work I’ve seen on SNL.

Kyle Mooney’s fake tough guy is a ton of fun.  It’s a great look at the nu-metal scene/fans from the late 90s.  Plus, all the B-Roll footage is hilarious.

Kristen Wiig gives the movie opinions of just about every middle aged woman. Her massive eyerolls, exaggerated facial expressions and sheer dissatisfaction make this one of Wiig’s best Update Characters.

Heidi Gardner manages to nail both awkward teenager, and YouTuber flawlessly. It borders on cringe comedy, but still manages to be an accurate description of most YouTube reviewers.

A children’s educational hip hop show gets trapped in a bear cave.  When Andy Samberg plays the voice of reason, you know you’ve got an out-there sketch. It’s definitely stupid humor, but I love the bears, and the stupid ways Zig Zag gets served.

A perfume brand that warns men about women being crazy? Hilarious.  Kristen Wiig does a great job as the woman in the ad, but the real MVP is the voiceover.

Okay elephant in the room: yes, this is similar to Tig Notaro’s short film Clown Service. That being said, I still think SNL did a great job with this. Bobby Moynihan does a great job as the birthday clown confused and uncomfortable about performing for a 50-year-old man.  And yeah, Louis CK is good as the depressed man who hired a clown. I probably should’ve picked something else, but I really enjoy this sketch.

Weekend At Bernie’s  is an 80’s comedy that does not hold up when you think about the plot for a minute.  The decision to show how the movie would play out in the real world is a great joke. Robert DeNiro really sells the sketch, especially with the ending.

Is this sketch just a reason to bring back Molly Shannon and Ana Gasteyer’s ‘Delicious Dish’ characters? Yes, yes it is.  Is this sketch just an excuse to have legendary comedic actress Betty White say a bunch of double entendres? Yes, Yes it is. Do I care? Not at all. 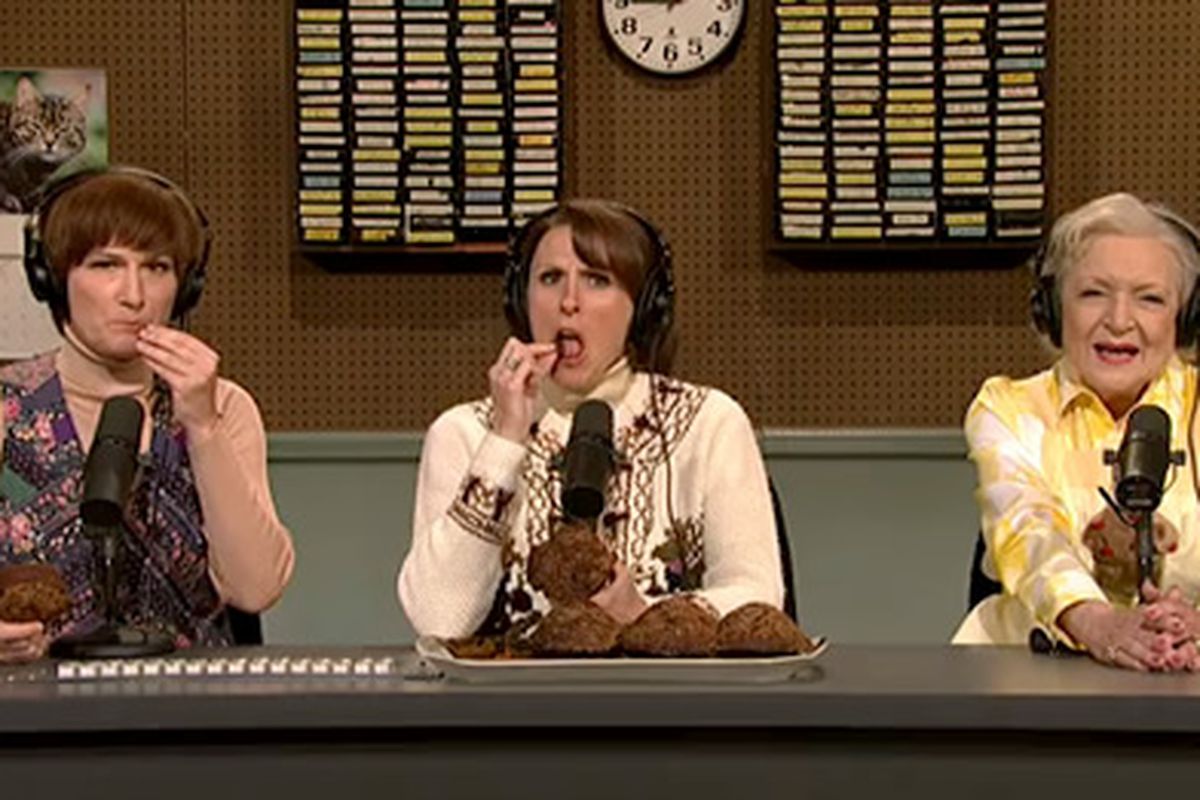